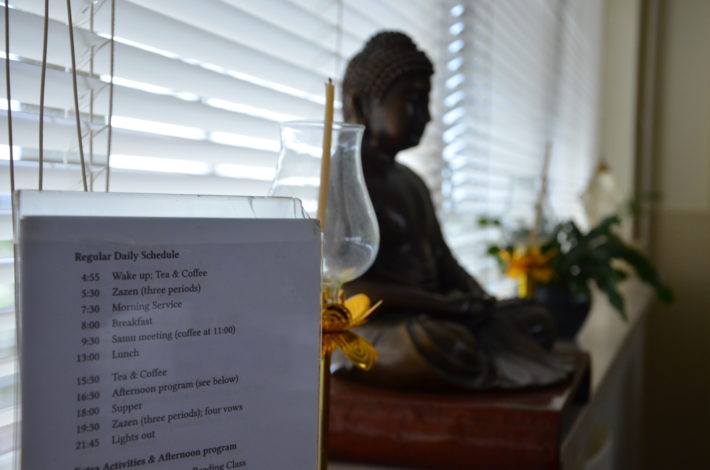 While Catholics are struggling to keep their followers in church for Sunday services, Buddhism has become trendy during the last decades: Meditating Buddhas in between boxwood hedges of front gardens aren’t unusual, joss sticks are a “must have” in every household and Yoga has taken its place as a trend sport a long time ago. But what does it mean to be a real Buddhist? In Zen River, an international Buddhist monastery in Uithiuzen (Groningen) a dozen monks practise Zen Buddhism. And spending a whole day there showed, how different this life is from what people might like to imagine Buddhism to be.

The big door groans slightly as I open it and step out of the misty Dutch landscape and into the sharp scent of joss sticks. On the opposite of the entrance hall a Buddha statue stares at me out of its shrine, weaved mats cover the tiles on the floor and my welcoming committee is already there: Robert Doin van de Roer, Buddhist monk and responsible for the office work of Zen River. The Buddhist monastery has been founded in 2002 and is keeping “the Zen tradition alive for future generations” as they proudly present themselves on their website. Robert has been here almost since the beginning as he tells me: “But that’s a story too long to tell.” Having a good job as a software consultant, Robert could afford to spend some months in the monastery and eventually stayed there. “Now I’m working in Zen River”, he says, hurrying through the kitchen and a door inscribed with “reception” to his office.

Today Robert’s designing some postcards for the temple and he’s already prepared a chair for me in the corner, so I can watch him and at the same time have an eye on the front garden, where some monks are transporting material. They’re finishing the Temple Gate, they’ve been building for over a year now. But work on Saturday? “Actually, it’s Monday for us now,” Robert explains, “As we have so many guests, we moved the weekend to Thursday and Friday.” While he’s working in InDesign, moving pictures around and sighing unsatisfyingly, I ask about the financiering of a project such as Zen River. “We have some donators”, he answers, “and a lot of international visitors. Today some people of the U.S. and Malta are arriving today, tomorrow it’s some Finnish guys. But still, I don’t know how long all this will exist. Time will have to show.” Buddhism, he says, is actually not that popular anymore and Zen River suffers from that too.

Only shortly before the tone of the bell, calling the monks for noon prayer, echoes through the hallways, the first guests of the day arrive: “It’s always my task to take care of them and show them around”, Robert says, while we hurry through half the monastery again to greet the guests. The short welcome tour with the newcomers leads us from the spartan guest rooms – folding beds and plain white walls – to the Kaisando, the ancestors’ room with a special altar for Maezumi Roshi, who was a pioneer of modern Zen, the form of Buddhism, which is practised in Zen River. A big genealogical tree on the wall shows the line of Buddhist teachers since Buddha himself until Tenkei Coppens, the “Hojo” (=abbot) of Zen River.

Last station of the tour is the Zendo, a separate building, where the practise of sitting “zazen” takes place: Every Morning and evening all the monks gather here and take their places to meditate for two hours in total. “This is not about relaxation as most people think”, Robert explains to me. “It’s about endurance and concentration. Letting your mind wander around is not zazen but becoming one with the thing you concentrate on and then emptying your head completely.”

The tour is over just in time for the noon service: Whoever can interrupt his/her work gathers in the room I thought was an entrance hall. Actually, as I learn now, this is called the Hatto, a ceremonial hall with the main Buddha statue of the temple. The sound of singing bowls fills the room now as the Buddhists bow in front of the statue, before the kneeling on the mats, praying so fast, that I can’t understand a single word of the murmuring. Turns out, the monks do neither: “It’s not about the words”, one of them explains me later, “It’s about the feeling they create.” The whole procedure comes to an end after only ten minutes: The Buddhists leave the hall again, accompanied by singing bowls, their long robes flattering in the brisk movements they make. Time for lunch.

As the monks get up at 4:55 every morning, there’s a short break after lunch and the whole monastery seemingly falls asleep. I use the time to roam through the temple, eventually landing in the library, where I get my first lessons about Buddhism in between old school wooden book stands and shelves. “Zen”, I read, derived from the Sanskrit term “dhyana”, which can be translated with “quiet thinking” and its training consists of The Three Treasures: Buddha – the relation between teacher and student -, Dharma – the actual training – and Sangha – the association with other practitioners. In Zen River, which is inspired by the Soto school, a Japanese line of Buddhism, these Three Treasures manifest in four Elements of training: Meditation, Ritual, Study and Bodhisattva Activity, which means as much as exploring ways to manifest our true nature in the everyday world.

Afterwards it’s time for afternoon tea and again the community gathers in the living room full of wicker chairs, chatting a bit while the have coffee and cake. I quickly find myself next to a young Belgian entrepreneur, who has come here for two weeks of retreat after a harsh year, as he tells me. “I lost my money, my girlfriend, then I had to undergo some surgery. So, I decided to come here. It’s hard physically, the sitting and the work, but it calms the mind in a wonderful way.” Next to him, Tessa Overbeek, the head monk for this Winter, has taken her place. Just like all Buddhist monks, she has shaved her head to show that she’s nothing special. Once a freelance editor, who studied at Groningen, Tessa visited a Buddhist service a long time ago. “And see what I’ve become after that, a nun”, she says, smiling brightly.

Sutra reading and a Winter tree

Winterly darkness has swallowed the fields next to Zen River as today’s afternoon program – a Sutra reading class – starts: The study room, hidden somewhere upstairs near the rooms of the guests, is bathed in the warm orange light of some Asiatic lamps. I help Robert to place some mats on the floor and adjust the projector, before the room fills up with monks in black robes. They sit down in the traditional Lotus or half-lotus position, knees on the ground and start reading. For over an hour they go through Buddhist texts, where Mahamati and The Blessed One discuss abstract matters, impossible to understand for the layman.

Later in the living room, where I got myself a cup of tea to warm up – the temple is heated as much as “necessary” and I’ve been freezing since the morning – I meet a nun decorating a tree, which looks suspiciously like a Christmas tree to me. As I ask, she takes a step back, looking at the lights, she’s placed all over the fir: “I wouldn’t call it a Christmas Tree”, she says, “It’s more a Winter tree, just a beautiful thing, bringing a bit light in our lives.” Then she tells me that she’s originally Polish. “Christmas was very important back home. My father would even use fine white wool to simulate snow on the Christmas tree. Unfortunately, I don’t have enough time here”, she says, before putting on the third light chain.

In the evening a large group of practitioners follows the path of stone tiles leading to the Zendo building, where a small sign claims “Absolute silence”. Without speaking everyone takes of his shoes, entering the large room with the Buddha statue in it and sitting down on their cushions, the small mats for meditation. I climb on my spot, carefully trying not to touch the wood with my hands, sit cross-legged, my left hand on the right one and a gong starts the first sitting period of half an hour. For a few seconds there’s still some noise in the Zendo, people adjusting their mats or moving a little bit to get comfortable, but suddenly it’s so quiet, every breath I take bursts in my ears as if I was in a room full of dead statues instead of monks.

I try to apply what I’ve read in the afternoon: Count your breaths, become one with my count, nothing else matters. But other thoughts keep sneaking in. My eyes are open, we’re turned towards the wall to avoid distraction, I keep looking at the yellowish painting, can’t keep my thoughts out. So instead of counting, I try a mantra and as I’m a huge Star Wars fan, it’s “I’m one with the force and the force is with me” – and somewhere before the gong clings again and wakes my up, I lose myself in my mantra, falling in a kind of trance.

I leave the temple after the first sitting period to catch an early train back to Groningen and Robert accompanies me to the exit. The lights of Zen River become smaller and smaller behind me as I’m walking through the icy December night to the train station, the real world seems so much louder and faster than the life in the bubble of the Buddhist temple.