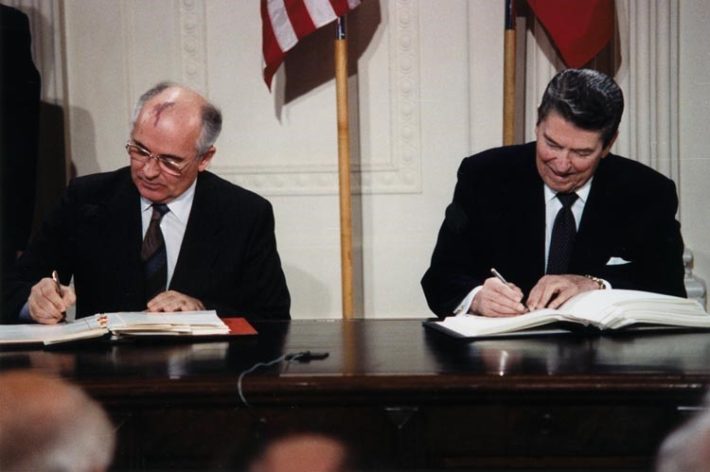 In 1988, the United States of America and the Soviet Union signed the INF treaty in which they promised to disband all intermediate- and short-range missiles. This included nuclear and conventional missiles as well as the launchers. Last Saturday however, Donald Trump said that he wanted to terminate the INF treaty. The question is: why? And more importantly: what are the consequences?

Alleged Violation of the INF Treaty

President Putin stated in October 2017 that any action in relation to the INF pact will see a “mirror-like” response. If Trump is indeed planning to make more missiles like he says he is, then we can expect Russia to do the same.

Other sources give other reasons why Trump wants to terminate the treaty. Russia Today says that Trump wants a unipolar world in which the USA will be the biggest power. “This decision is in line with the US course to quit international agreement,” a Foreign Minister said. “His main motive is the dream of a unipolar world”. Aleksey Pushkov, a Russian Senator, took it even further. “The US is returning the world to the Cold War. Russia will not allow nuclear superiority over itself”.

Some people in Europe also think Trumps claim that Russia violated the treaty might be a cover-up for another reason. Metro, a Belgian newspaper, also published an article doubting Trumps motives. They write that Trump wants to make more nuclear weapons to feed his dream of a unipolar world. A Defence Office spokesman of the Bundestag in Germany, Roderich Wiesewetter, told a German newspaper that “the pact treaty has to stay intact in order to prevent nuclear danger to Europe.

When Nixon and Reagan signed the INF treaty they signed it to be for unlimited duration. With this treaty, they made an important step to end the Cold War (1945-1991). Many papers refer to the cold war when writing about Trumps decision to terminate the INF. Just like in the Cold War, Russia and the USA are planning to build more missiles. Will there be another (Cold) War or will this be solved before both nations start a new arms race?

A unipolar word means a world with one pole (one pole =uni-polar), so one world-power. In the cold war (1945-1991) both the Soviet Union and the USA wanted a unipolar world with their own country being the one power (though both didn’t admit it)