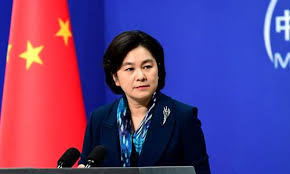 The Foreign Ministry of China said on 5 October that it was “ridiculous” for Washington to characterize China’s regular exchanges with the US as interference, after US Vice-President Mike Pence accused Beijing of meddling in American politics.

“It is very ridiculous for the US side to stigmatize its normal exchanges and cooperation with China as China interfering in its internal affairs and elections,” Foreign Ministry spokeswoman Hua Chunying said in a statement.

Pence’s speech “made unwarranted accusations against China’s domestic and foreign policies and slandered China by claiming that China meddles in US internal affairs and elections”, said the statement.

“We urge the US to correct its wrongdoing, stop groundlessly accusing and slandering China and harming China’s interests and China-US ties, and take concrete actions to maintain the sound and steady development of China-US relations,” Hua added.

In Washington on Thursday, Pence said in a speech at the Hudson Institute, a Washington-based think tank, that China was using “wedge issues” such as tariffs to advance its political influence in the US and globally. He accused China of seeking to sway the US midterm elections on Nov 6, in retaliation for US trade policies against Beijing.