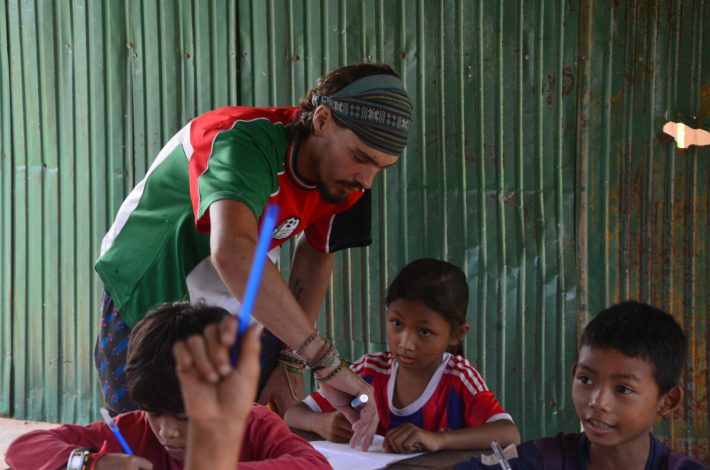 Traveling is a normal thing in today’s society. A lot of people travel to other countries for vacations, but Juha-Matti Laakspohja, 33, hasn’t settled with only traveling for one week. He has been on the road for over two years, working as a volunteer in Cambodia and at farms in Australia.

It’s a hot day in Australia, where Juha-Matti Laakspohja is laying on his bed and giving me his time for this interview via Skype. Outside of his window the sun is shining. The warmth makes me jealous, because the view from my window is not nearly as nice.

Juha-Matti has been on the road for almost three years. His journey began in July of 2015 from Helsinki, Finland. He had been saving a lot of money with his girlfriend to be able to fulfill his long time dream. First they travelled through Russia with the Trans-Siberian Railway.

When traveling in 3rd class, they shared a carriage with approximately 50-60 people. “You really got to know a lot of people. Especially Russians, who all had bottles of vodka and boiled potatoes with them”, Juha-Matti says laughing.

The longest time they spent on the Trans-Siberian train without stopping was 36 hours. Playing card games was a good way to kill time while on the train.

“The worst part was, when we packed cheese and boiled eggs to our backpacks. But it was so hot that the cheese actually melt.”

After Russia they traveled through Asia and from there to their current place in Australia.

Juha-Matti isn’t a beginner when it comes to traveling. His family moved to Spain when he was only seven years old. That sparked the flame and traveling has been a big part of Juha-Matti’s life ever since. He has been in almost every corner of the world and names China and Moldova as one of the most interesting countries he has been to.  When I ask about his favorite cities, he finds it hard to answer.

“There’s no point to go through my favorites, because I would end up telling you about half of those I’ve been to.”

He was born in the southern most part of Finland, but hasn’t called Finland his home for years. Over the years he has lived in Spain, South-Korea, Sweden, Iceland, Poland, France, Norway and Ireland. In Ireland he met his girlfriend, who shared his interest in traveling.

“Meeting her made the process of planning this backpack trip easier”, he says. “Saving money was easier, when both of us made a commitment to save money.”

When they started their journey, they had 16 thousand US dollars saved. “You can easily live a year with that in Asia.”

Being a 33-year-old without a degree is something peculiar. After high school Juha-Matti attended some humanitarian as well as global health courses. One of his goals on this trip is finding his own thing.

“I couldn’t imagine myself working from 9 to 5 everyday”, he says. But if something truly interests him, then he could also see himself working in standard hours.

Teaching as a volunteer

Juha-Matti is not lazy by any means. He is used to working and has a lot of experience from different fields.

“In Iceland I worked as a manager in a car rental firm, from there I went to work as an accountant to Poland and after that I went to a travel business in Ireland”, he summarizes his work experience.

One of his latest work experiences was in Cambodia, where he and his girlfriend did volunteer work. They volunteered as English teachers in Rural Teaching Organisation Cambodia (RTOC). The school is located in Thnol Trong Village, which is a small town just outside of Siem Reap town. Before the trip, Juha-Matti got himself a certification about Teaching English as a Foreign Language (TEFL). He says that small schools like RTOC don’t require the TEFL certificate, but are happy if the volunteers have it.

“They need more teachers, so it was surprisingly easy to get in [as a volunteer.]”

Volunteering isn’t only teaching, but it can consist of building and helping other ways too. Juha-Matti and his girlfriend wanted to do more than just volunteer, so they organized a fundraiser for the school. They promoted the fundraising on Facebook and soon their friends and friends of their friends wanted to help. In the end they collected approximately 1,200 US dollars.

“Best thing is that we got to help a few of those kids to have a better future”, he says about the reasons behind the fundraiser.

With the money raised they were able to open a whole new school in a building nearby. On top of that they bought new school desks, books and other useful school stuff. They also bought the supplies for two football nets, that they build themselves.

Along with traveling, Juha-Matti lists skateboarding and watching sports as his hobbies. In Iceland he also played ice hockey, but now he sticks to only watching it. He doesn’t think of himself as a patriotic man, except when it comes to ice hockey. Unlike in many other European countries, in Finland ice hockey is the biggest sport.

When I ask about the life after the backpack trip, Juha-Matti gives a laugh. “I hope there is no life after the trip. I mean I want to live, but I hope this journey never ends”, he says.