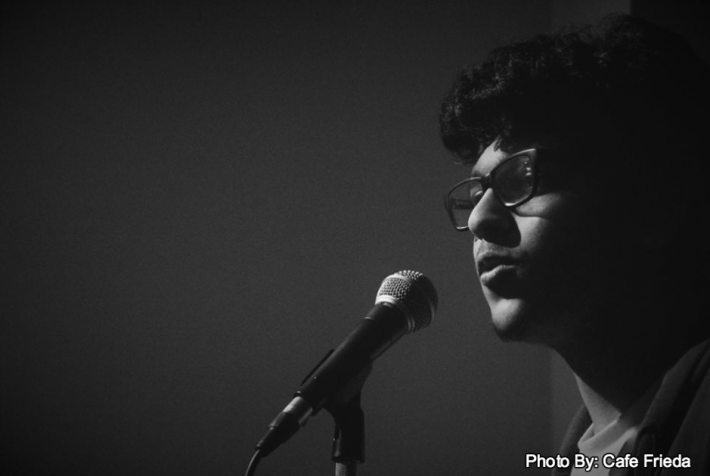 If Atma Jyoti Mahapatra’s life was a highway, the warning signs would read: ROFL & LOL ahead!

Atma Jyoti began his commute after dinner with a swing in his step as he headed out of his cosy studio. Due to perform at a popular club downtown, it seemed like every cell inside his body had been charged up. “Nine gigs in, and I still feel electric each time I have to perform!”, said Atma, releasing some of his fizzing energy.

Dressed in light blue Levi’s, a plain white t-shirt and a dark henley neck pullover, he wore his cap sloped backwards, adding to his too-cool-for-school demeanor. Atma, who once held the reputation of alternating between his two favorite track pants each day for a year, had tonight opted for something slightly less comfortable. When he’s on stage, microphone in hand, trying to make a crowd erupt with laughter, the feel of rugged denim against his skin helps him get into the right mindset.

The much-awaited Uber pulled over, we hopped on and he told me his story.

It would not be wrong to say that Atma Jyoti and stand-up comedy are a match made in “comic heaven.” Call it a coincidence but his decision to become a stand-up comic was a result of a bunch of his friends jokingly mentioning that he should get on stage.

Born and educated in a town called Bhubaneshwar in India, Atma’s life changed in more ways than one after he moved to the Netherlands to study Economics at the University of Amsterdam.

An eleven-volume document could be written about all of those changes, but the most significant one has to be the fact that up until this point, his life as a student of Science had been about Physics, Chemistry and Math. But a few months into University that transformed into a life of Punchlines, Catchphrases and Monologues.

“I never thought I could address an audience, let alone do stand-up before I moved to Amsterdam. But every now and then I would make funny comments about life in Amsterdam and Dutch behavior. A couple of my not so genius friends joked about how I should get on stage. Joked about it. Can you imagine that!”

“But thanks to my genius brain, I thought – this is it. And that’s how I decided to do stand-up comedy.”

Inspired by stand-up comedy kings like Russell Peters and Conan O’Brien, and coming from India, Atma realized his country’s need for indigenous stand-up artists and then there was no more looking back for him. He even started writing his own blog and was now on a roller coaster that only went up.

A bright-eyed boyishness shines through Atma’s eyes as he talks about his initial stand-up days. With the thought, “am I going to be funny or not?” hovering over his head constantly, Atma was naturally feeling nervous and jittery. But because of his spontaneous thought process and his general logicality, it was not too long before he figured out an interesting way to calm his nerves.

“I wrote down my content, and made sure there was a logical order to it. But at the same time, I casually mentioned my jokes to my friends in random conversations, just to make sure they worked.”

The events that led up to the young artist’s first gig at Café Frieda, Amsterdam, in 2015, were as challenging, as they were exciting. Clueless as to how a room full of foreign audience would react to his material, whether they
would be able to relate to it or not, Atma fought his nerves and as tough as that was to do, “it was the best thing I could’ve done to myself because it paid off big time!”, Atma said, expressing his gratitude.

Atma remembers feeling vulnerable when he went on to the stage at Café Frieda that eventful night as two dozen people watched him, expecting him to make them laugh. Sweatily clutching on to the black cordless microphone, he delivered his first killer bits and as the laughter came in, it filled him inside like a drug rush.

“I tried to stop it, but it was like my cheeks had a brain of their own and they blushed”, he recalls and a warm, red glow flushes his face as he speaks.

With every punchline that Atma delivered, he felt a wave of affection and warmth coming his way, and soon it was like he wasn’t staring into eyes anymore but souls that related with him and had a lot of empathy.

It had been one of the best nights in Atma Jyoti’s life so far and what followed, was a sense of euphoria.

“I was elated. I was proud of myself, because I was sharing my experience in a foreign land, in a room full of strangers and still managed to overcome my stage-fright and deliver a good show.”

Like the memory of a lingering summer, the memory of the night of his first gig lays imprinted in his memory, and he looks nostalgic as he sums up his biggest take-away from the night:

“The audience loved me, and I am not exaggerating. A friend of mine was literally in tears midway through the show, and for that one night, I was a rockstar.” 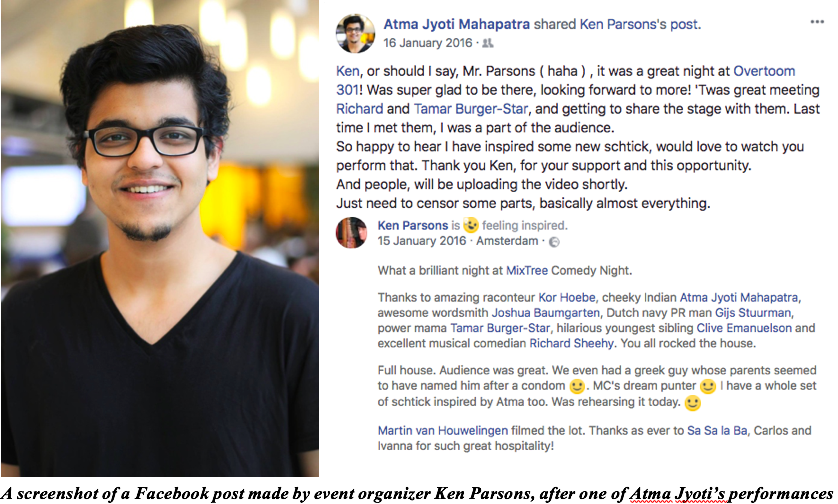 As would be evident to a random pedestrian walking 5 feet away on the street from Atma, being the star of the show comes to him very naturally. And now that he had had the taste of the “sweeter life”, he grabbed every opportunity that knocked on his door.
Word, or perhaps laughter (in Atma’s case) spread about Atma’s fresh jokes on Dutch food, Indian food and culture stereotypes. The UNICEF Team in Amsterdam contacted him with an offer to perform at Boom Chicago, one of the best places in the world to perform.

“I have a dream .. That someday I’ll pass Accountancy.”

That should pretty much put things into perspective.
Former Marketing Head of the UvA’s Rostra Economica magazine, and member of the university’s Faculty Student Council Economics and Business, Atma’s heart is conflicted between his undying passion for Economics and his eternal love for stand-up.

After spending a lot of time (or not) deliberating on which one he would secretly choose, Atma says he would prefer a lifetime of making jokes and making moments happier for people, but his logical alter-ego reminds him how difficult it is to sustain one’s self in such a career.

For now, Atma is happy with how he has been striking a balance between studying Economics and honing his stand-up skills. For him, the key lies in time management. His interests require him to be creative and observant at the same time.

He makes mental notes of when his friends and colleagues find something he says funny. “And if I am just relaxing, I think about puns and funny things that I could talk about. Hot showers are usually the best”, he says with a playful wink of the eye.

The Uber pulled over again, this time outside the club where Atma is supposed to perform. He got out of the car, gave himself a good shake and almost inadvertently said out loud, “Let’s get this party started!” His energy was contagious. 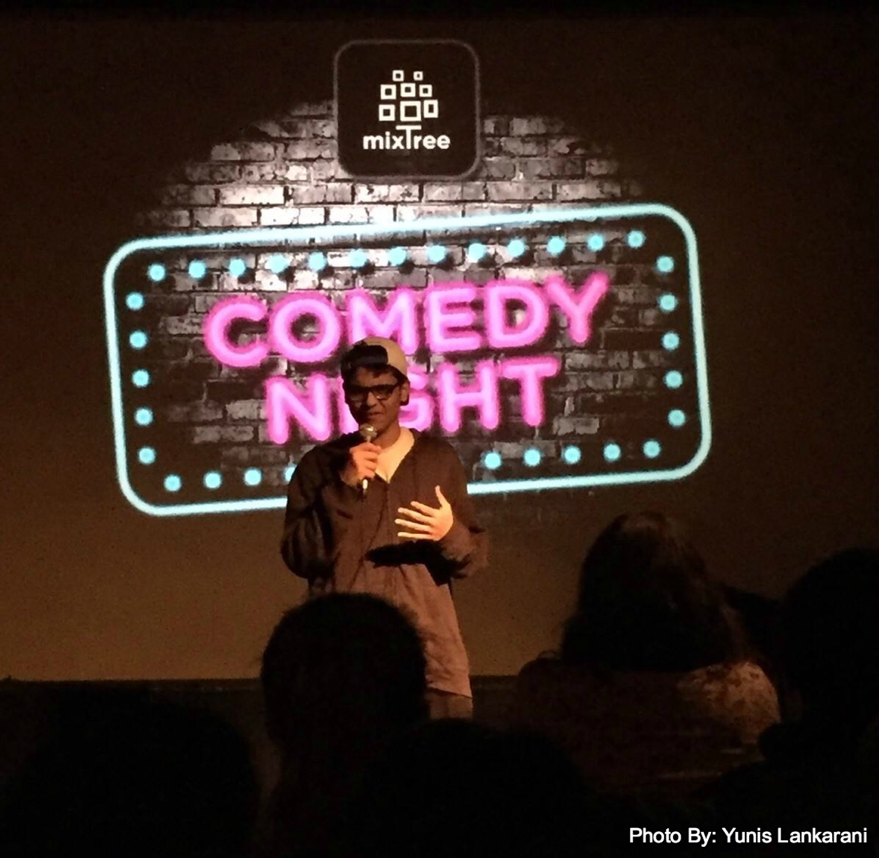 ATMA: Hey guys! I am Indian, so I have a bit of an accent, are you able to
understand me?
CROWD: Yes!
ATMA: Great great! Because my friends back home never did.

And a burst of laughter echoes through the local bar, packed with dozens of people, having a drink and cheering Atma Jyoti on as he continues to tickle their funny bones.

Anastasia Kovalenko from Ukraine, a good friend of Atma Jyoti’s, is spotted in the crowd, hooting the loudest. “He is an absolute rockstar! On and off stage. He is the life of all our parties and we love him”, she says after Atma’s gig is over.

Maxim Tudor from Romania was attending the event with his friends and he said, “Man’s amazing! I love his sense of self-deprecating humor and his comic timing is commendable. Looking forward to more gigs by Atma Jyoti!”

After spending some time talking to people, Atma Jyoti goes back up on stage to say, “You guys have been awesome! Thank you so much for coming out tonight, if you want to come out further, please join the Sexuality Anonymous help group!”

Impressed with his own candor, he has a look of amusement on his face as he signs off.

To read some really interesting articles topped with Atma Jyoti’s sense of humor, check out his blog.