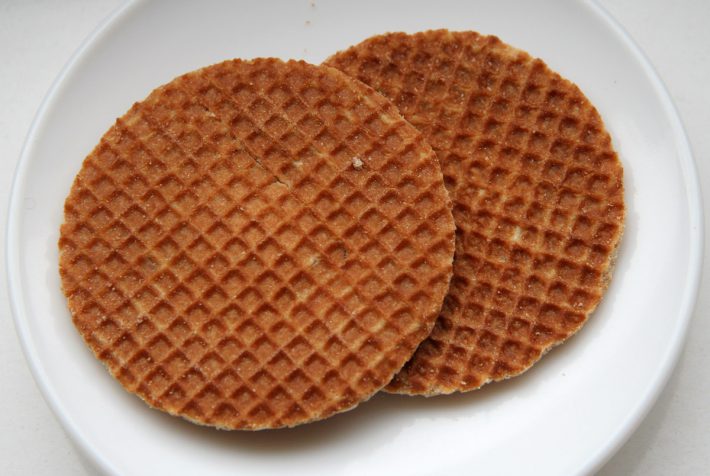 When arriving in the Netherlands as a foreigner there are a few things that you’ll be quickly introduced to.

The first will most likely be the piercingly cold weather that eats at the fingertips. You’ll then come across the many canals and streams that intertwine throughout the country. However, you won’t go long without being presented with the iconic syrup-filled cookies known as the stroopwafel.

Whether these delicious treats are offered to you from a friend or your nose gravitates toward the aroma as you walk along the market, these freshly made warm snacks are impossible to ignore.

Thorben Buitink, a young stroopwafel baker in Groningen, returns to the market multiple times a week to sell his freshly made waffles.

an internship for school. The environment and love for the food left such an impact on him that within a year he began making his own.

Over six years have passed since then and his passion has only grown along with his success as a baker. Although his preference over summer weather than winter chills is apparent, he is aware of the effect he has left with others.

“People who don’t come from Holland come here and they take a lot home,” said Buitink. “A lot of outsiders like them, it’s amazing.”

Stroopwafels were introduced to the Netherlands in the city of Gouda, just south of Amsterdam, during the late 18th century to early 19th century by what residence describe as a “humble baker.” Though reports of waffles were baked since the 7th century with a waffle baker guild following in the 13th century.

Leftover breadcrumbs were used to create these carb-filled delicacies with a waffle iron compressing them together. This mould found to be too fragile and crumbled with the slightest pressure.

That is when the caramel-like syrup (stroop) was introduced in 1840 to perfect the nationwide phenomenon.

Over 100 stroopwafel bakers were isolated within Gouda until 1870 when the sandwich filtered in markets outside of the city.

Factories rose to distribution by 1960 with 17 factories being placed in Gouda alone, four of which still stand.

It is reported that over 22 million packs of stroopwafels are sold each year and the number continues to climb.

It even seems that stroopwafels may not be as exclusive going forward.

The worldwide market leader in stroopwafels, Daelmans, plans to share the Netherlands’ specialty with the rest of the world in the near future.